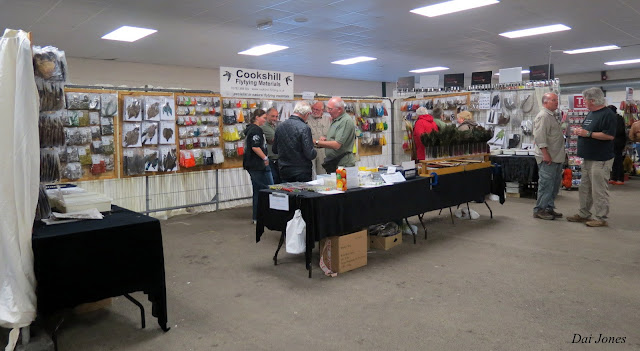 On the 23/24th of June, the BFFI fly fair which is the best show far of the year. for anything to do with fly tying, and fly fishing plus good cast pool and instructors in them all. to help you out, i have been tying at this show now for four years. and have to say it gets better every year, i did take a few photos of some trade stands. luckily went around before the show opened, as it would have been hard work taking the photos when the visitors came in. above is the Cookshill stand, who not only run the show but sell the best materials you could ever want. 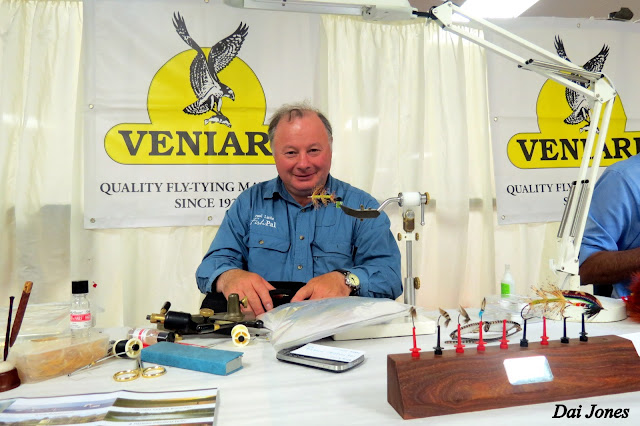 Above, one of the worlds best fly dresser. Paul Little top guy and tier, 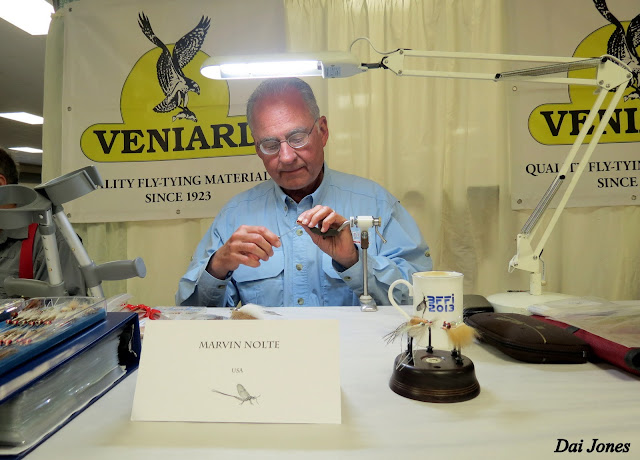 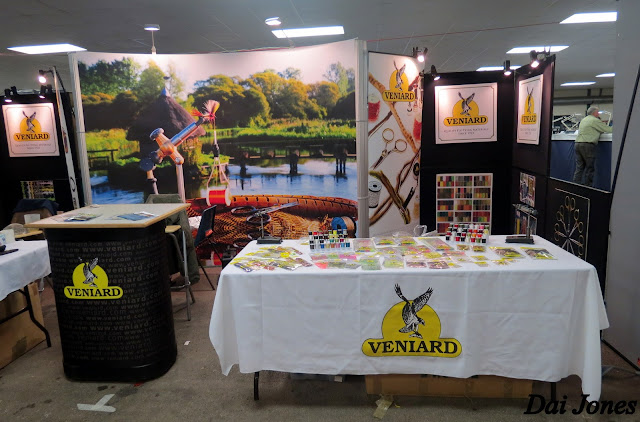 Above, the Veniard stand. showing the fine materials, 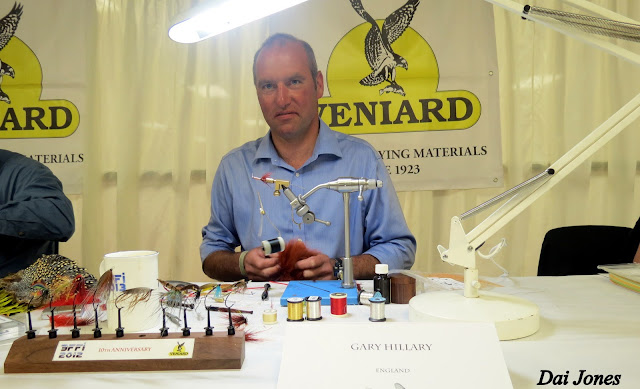 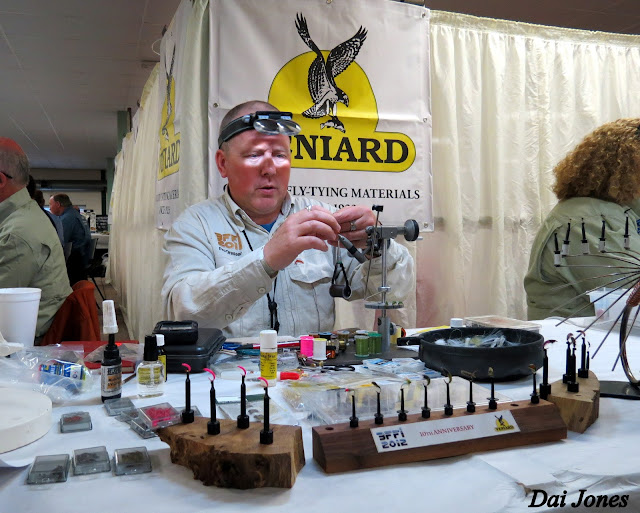 And above, a MAD Scotman, Scott Kane Deercreek pro tier. we had a good laugh in the nights out, 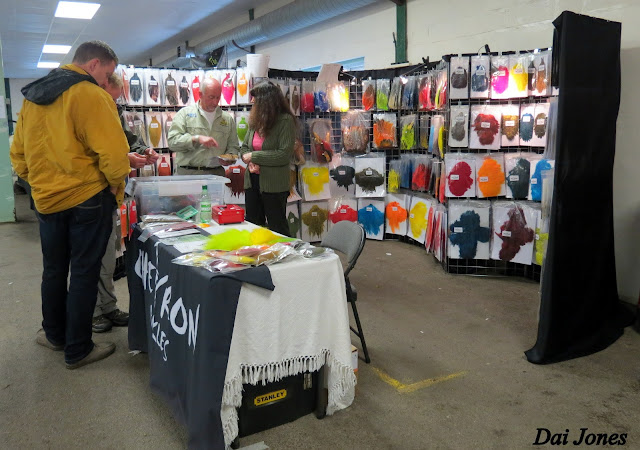 Above, Christina of Chevron feathers, i have a lot of her materials top class. 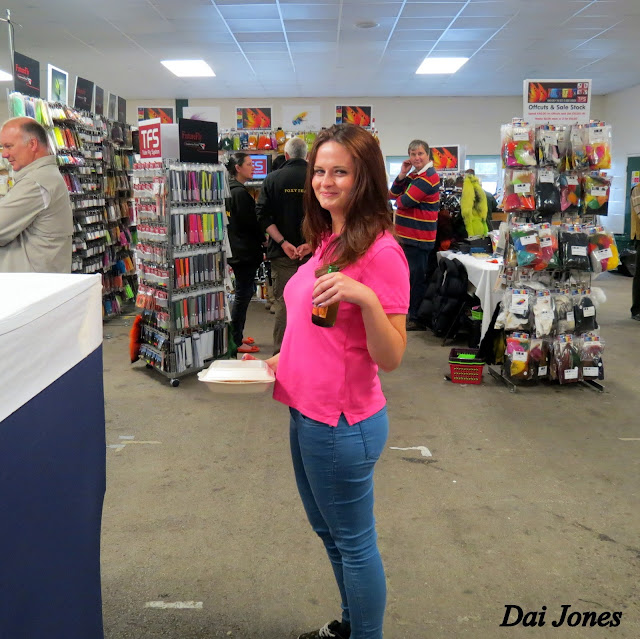 And what can i say about this little Northern Angel, Maddie who looked after me for two days. with drinks and food, what a girl. 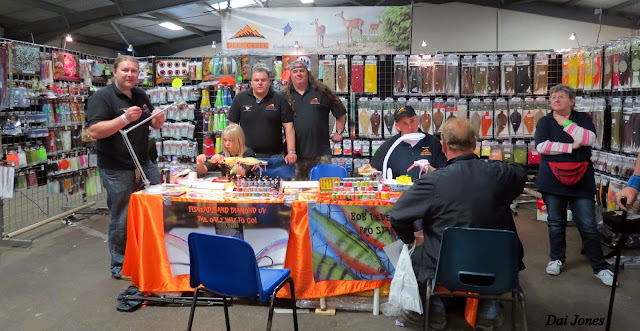 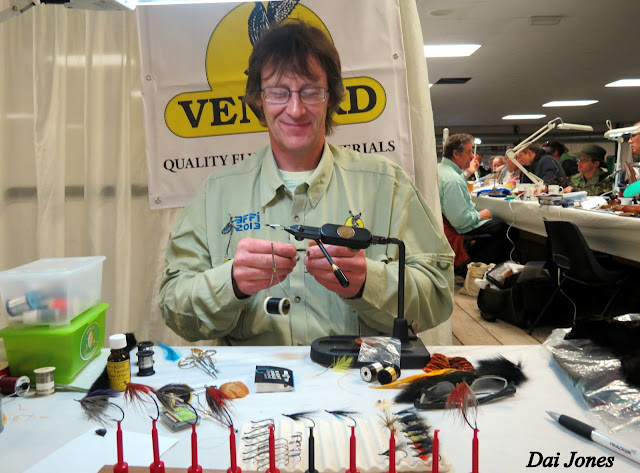 Dewi Williams, A man who takes a great photo, for some reason he does say he is not photogenic. and always tries to hide, when he sees me coming around with my camera . 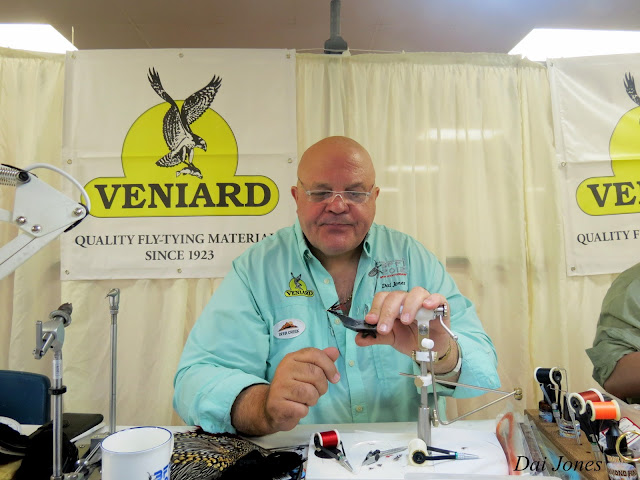 And above, myself tying to tie a few flies. its the fourth year i have tied here, and have to say love the show.
And below, Sue of Foxy tails, have to say her stand just gets better ever year. with new materials, 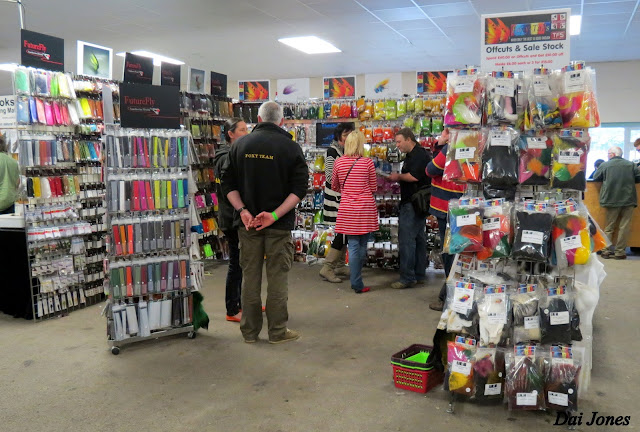 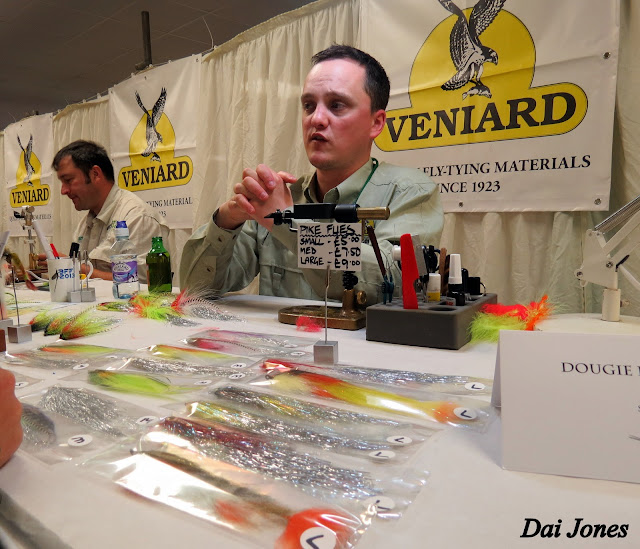 Above, Dougie helping out with his knowledge. of pike fishing and pike flies, 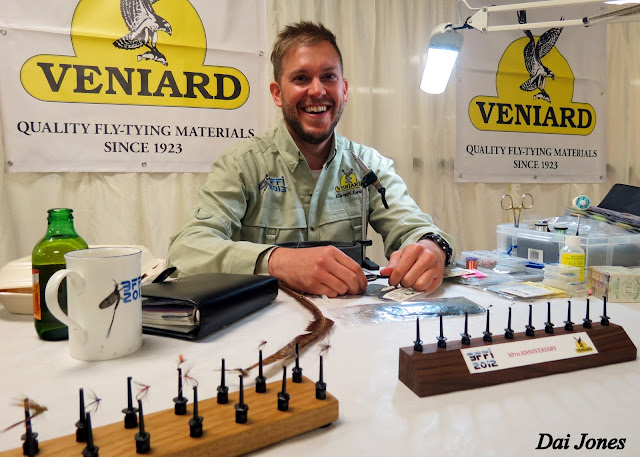 And my old mate, Gareth Lewis who always has a smile for you. and as you can see loves his beer, and top tier of micro flies and small stream fishing. 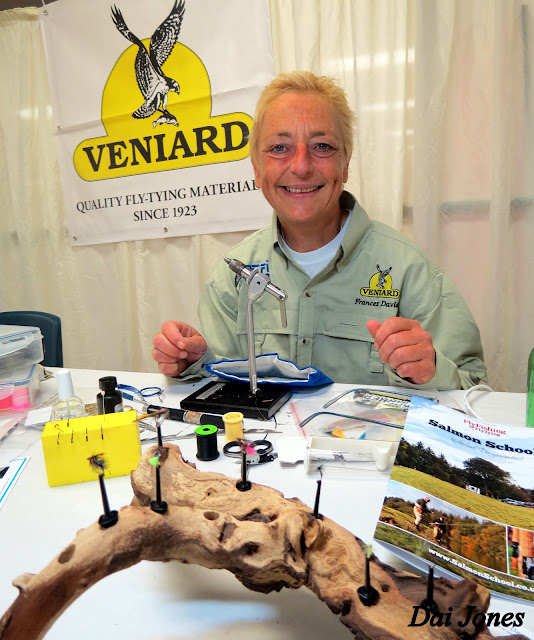 Above, Frances Davies well known  female fly tier. and seen tying at many of the fly tying shows in Europe, 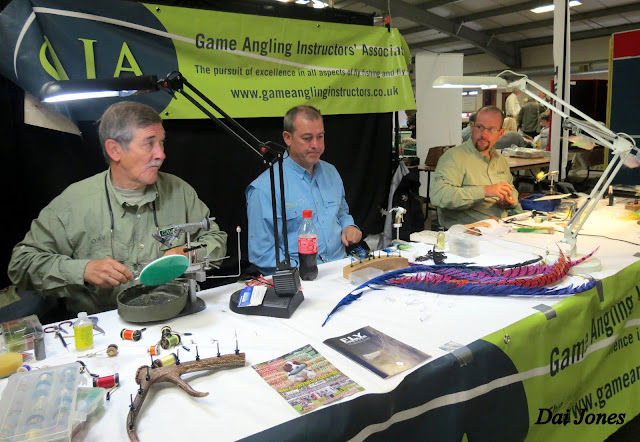 Above on the GAIA stand, Lou Noble, Alun rees and Chris tying there little harts out.

And below, Frank Moors tier of some fine fishing salmon flies. telling a watcher about a subject he asked about, 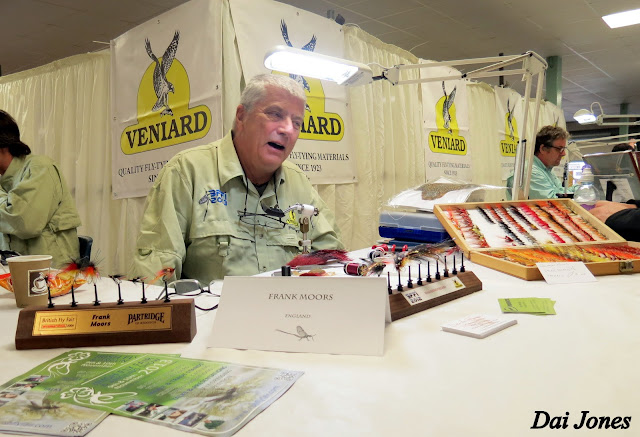 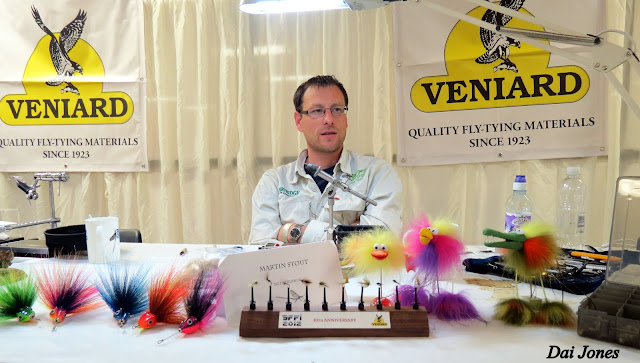 Above, Martin Stout with a collation of is off the wall pike flies. 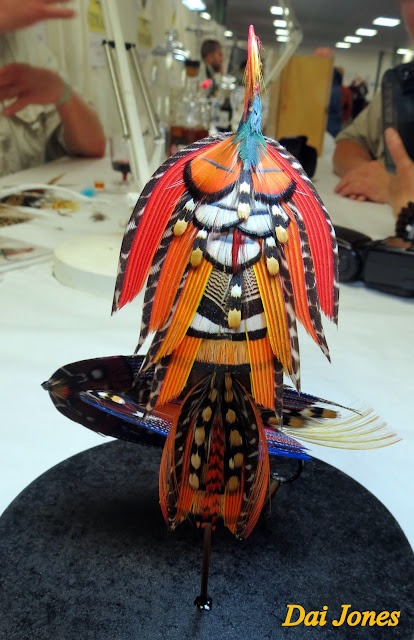 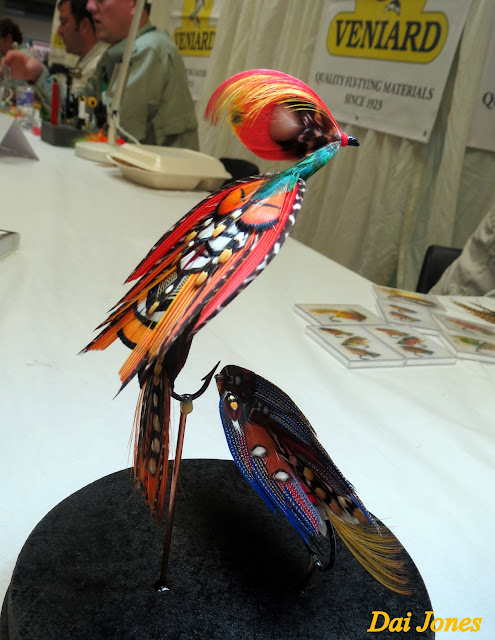 Above, a great tying. and putting together of feathers, supper work indeed. as i said great weekend and roll on next year,
Posted by daijones at 13:43